A Selection of Portland's Best & Brightest 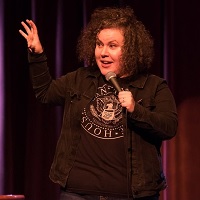 Andie Main
Andie Main is a Portland-based comedian who keeps busy by producing/hosting The Doug Fir Lounge's summer series The Cool Kids Patio Show, and her politically themed series called Revolution Comedy, which organizes fundraisers for progressive causes like Planned Parenthood, The ACLU, and Don't Shoot PDX. Festival credits include The Comedy Exposition, repeated appearances at SF Sketchfest and The All Jane Comedy Festival, Bumbershoot, Seattle Sketchfest, Portland Pride, Treefort Festival and Cromfest. She is a regular feature for comedians like TJ Miller, Myq Kaplan and David Huntsberger and after the shows they've all said "hey Andie that was great!" and got brunch because you can order brunch whenever you want in Portland. In her spare time she enjoys taking hikes with her not-so-smart dog, pizza, making weird art, nature documentaries and yelling about the patriarchy.

Upcoming shows:
Made in Oregon 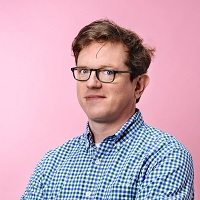 Jason Traeger
Jason Traeger is a comedian and visual artist living in Portland, OR. which sounds annoying even to him. He appeared in the Bridgetown Comedy Festival and was voted one of Portland's Funniest Five in Willamette Week's 2015 poll. He is a featured comic at Helium Comedy Club and has been a three-time finalist in the club's Portland's Funniest Person Competition. Jason looks forward to producing a podcast someday. 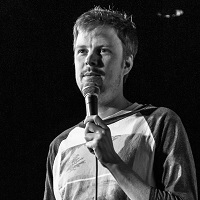 Jacob Christopher
Jacob Christopher is a Portland based comedian who's charming demeanor and relatable storytelling style has been killing with audiences across the country. As a past performer on the Bridgetown Comedy Festival and a regular host at Portland's Helium Comedy Club (where he hosts the Dirty Dozen showcase) and Harvey's, Christopher finds a way to walk that fine line between personal and public, unveiling aspects of his life that will have you laughing at your own memories of old crushes, childhood, and the occasional sexual exploit gone wrong. A full time comic and a regular at venues throughout the Northwest, Jacob Christopher is sure to leave the audience laughing with his dirty, yet professional, demeanor. 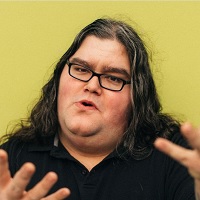 Dylan Jenkins
Hailing from Portland, Dylan Jenkins has become a rising star in the Northwest comedy scene. Growing up with divorced parents living in two very different environments, Dylan naturally developed a unique comedic perspective to help deflate intense personal situations resulting in an empathetic, yet relentless, comedic style that made him Willamette Week’s pick for Portland’s 3rd funniest person of 2016 as well as a finalist in the 2016 Portland’s Funniest Contest. Be it working in Portland as a regular host at Helium Comedy Club, preforming in bike shops and weed stores, or playing rural country bars and restaurants throughout the Northwest, Dylan is a crowd favorite wherever he preforms. Dylan’s comedy will leave you trying to remember his jokes as you poorly attempt to tell them to your friends the next day. They probably won’t work as well, but that’s not his fault. 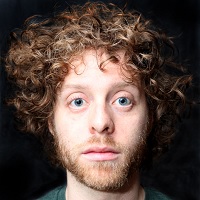 Jake Silberman
Jake Silberman is a Portland-based stand-up who might best be described as a hopeful misanthrope. Ranging from a day on the bus to race relations, Jake's material, as well as his penchant for crowd work and off the top observations, are making him a sharp name in Portland’s thriving comedy scene. Jake was a finalist in the 2017 Portland’s Funniest Person Contest. He is a regular host and feature at Helium comedy club, and has opened for Norm Macdonald, Kyle Kinane, Joey Diaz and many more. Jake has performed on the Mutiny Radio, Charm City, 10,000 Laughs and Sacramento Comedy Festivals. 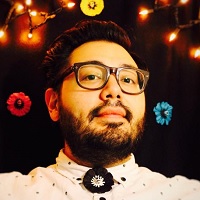 David Mascorro
David Mascorro is a Portland based comedian who’s quickly becoming one of the most sought after stand-ups in the Northwest. His infectious energy, natural charisma, and trademark style make each of his performances an unforgettable experience. The son of Mexican immigrants, Mascorro trained as an improviser at both the Annoyance Theater and Second City in Chicago. His unique upbringing and improv background allow him to craft vibrant, personal stories with energetic delivery and unrelenting punchlines. While his last name may be hard to pronounce, it’s never difficult for an audience to relate to David’s honed point of view. Mascorro has been featured on the Bridgetown Comedy Festival, produces several shows and podcasts (including Funny Humans, The Awkward Phase, and Bug-A-Boo), and regularly performs at Portland’s prestigious Helium Comedy Club. 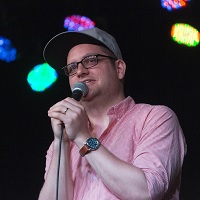 Alex Falcone
Alex Falcone is a comedian and writer living in Portland, OR. He’s been on the IFC show "Portlandia" a handful of times and he’s appeared at bunch of comedy festivals including Bridgetown, Bumbershoot, Sketchfest, and the Brooklyn Comedy Festival. His writing has been quoted in Rolling Stone, VOX, Boing Boing, and been featured on the front page of Reddit multiple times. In early 2017, he published his debut novel, a young adult romance called Unwrap My Heart about a girl who falls in love with a sexy mummy. Publisher’s Weekly called it “unfortunate.” And one time, Salt & Straw even named an ice cream flavor after him (“Falcognac”) and it was delicious. Despite these modest accomplishments, he’s somehow remained totally down to earth and approachable. 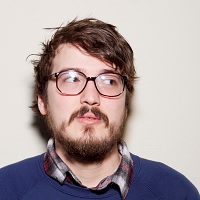 Anthony Lopez
Anthony Lopez is a Portland-based comic who has appeared on Doug Loves Movies and has written for the Gotham Awards and the popular Portland-based live talk show Late Night Action. Anthony has performed at the Bridgetown comedy festival, Bumbershoot, UCB East, and is a regular at several comedy clubs throughout the Northwest. He was recently a finalist in the Portland Funniest Person Contest and is a co-host of the popular weekly show Earthquake Hurricane. 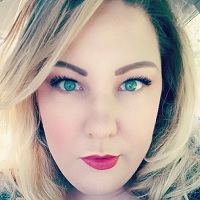 Amanda Arnold
Amanda Arnold is a Portland-based stand-up comic. As soon as Amanda gets on stage you're ready to laugh. This self-proclaimed "chubby not ugly" joke slinger delivers the funny from the very start. Amanda's fast paced, extremely funny comedic style earned her the title “Top 5 Funniest Comics” in Portland, Oregon by the Willamette Week in 2016. Amanda has been featured in the All Jane Comedy Festival, Idaho Laugh Fest, Bridgetown Comedy festival and Laughs on Fox. Amanda did stand-up comedy for the first time when she was 8 years old! Yes! You read that correctly! It's no wonder you get a feeling when watching her that some people are just born funny. 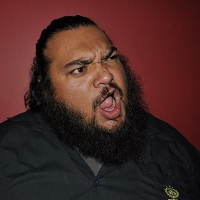 Adam Pasi
Adam Pasi is a Portland comic who is quickly becoming among the most recognized names in Northwestern comedy. Born in Tacoma, WA and raised on army bases on the East Coast and in Germany, Adam’s unique outlook on life allows him to craft absurd yet relatable stories, culminating in admittedly ridiculous calls to arms. Adam has appeared on the IFC show "Portlandia" and has performed on the Limestone, Wenatchee, and Bridgetown comedy festivals. He is a regular host at Helium Comedy Club, as well as a co-host of the bi-monthly comedy game show Funny Humans vs. The Wheel. Frequently intense, but never taking himself too seriously, Adam Pasi encourages all who’ll listen to join him in his mostly imaginary, but always amusing crusade against... well, something. Whatever it is, being loud and silly is the only way to fight it. 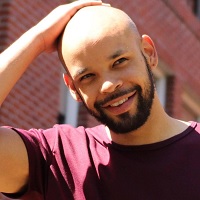 Brandon Lyons
Brandon Lyons is a comedian living in Portland. He does stand-up. Mostly light-hearted stuff about pop culture and race in America (that can be light-hearted, right?). He hosts comedy nights at Helium and Al’s Den, and has the best jump shot in Portland comedy. 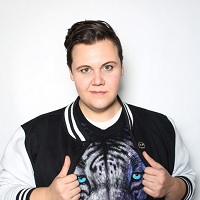 Caitlin Weierhauser
Caitlin Weierhauser is a kind-hearted bully, reminiscent of an elementary school PE teacher in their delightfully unhinged enthusiasm. They are sharp tongued and quick witted, frequently personal, often political, and entirely too tantrum-prone. Caitlin was voted best comedian by Willamette Week Readers' Poll and won Portland's Funniest Person Competition at Helium Comedy Club this year, and they are a member of Lez Stand Up, Portland's favorite comedy show voted Best 2016 & 2017. They have performed at Bumbershoot, Bridgetown Comedy Fest, Seattle Sketchfest, Savage Henry, and All Jane. 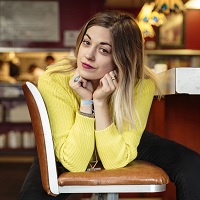 JoAnn Schinderle
JoAnn Schinderle was a finalist in the 2017 Portland's Funniest Person Contest and is regular host at Helium Comedy Club. She has worked with some of the biggest names that roll through including Kevin Nealon, Jen Kirkman, and Fazion Love to name a few. JoAnn's humor is relatable, snarky, and has a storytelling style that will make you feel like she's you best friend letting you in on a secret. She hosts one of the best local comedy shows every Sunday in NE Portland called Control Yourself. Once a month the show is recorded live & distributed as a podcast which can be found on Soundcloud and iTunes.