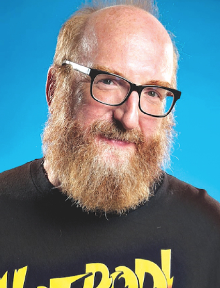 Brian Posehn may be a self-proclaimed nerd, but he's also the king of comedy cameos. With an IMDB page that reads like a laundry list of '90s/early-'00s comedy TV shows and movies, Posehn garners a fanbase that turn up for his self-deprecating humor, awkward relatability and unapologetically nerdy views.


Customers are expected to take necessary precautions to protect themselves and others. Per the CDC and local governments, we require all customers to enter the facility wearing a face covering or mask. When customers are seated, they are permitted to remove such covering while eating or drinking.

Comedian/actor/writer Brian Posehn has most recently been seen on Comedy Central's popular show, "The Sarah Silverman Program" and on tour as one of the original members of the "Comedians of Comedy".

Besides writing and performing on HBO's acclaimed "Mr. Show", he has appeared in sitcoms such as "Just Shoot Me", "Seinfeld", "NewsRadio", "Everybody Loves Raymond", and "Friends". Brian has also appeared in several movies, including Rob Zombie's "The Devil's Rejects" and "Fantastic Four: Rise of the Silver Surfer", "Sex Drive" and "Surfs Up".

In 2006 he released his first graphic novel, "The Last Christmas", and a comedy album: "Live in Nerd Rage". He is a regular on Late Night with Conan O'Brien and was a crowd favorite at the recent Bob Saget Roast on Comedy Central.

In 2008 he headlined the comedy stages at the popular music festivals, Download, Sasquatch and Bonnaroo. He also played a man with a prolapsed rectum on "Californication". In 2009 Brian wrote an episode of "The Sarah Silverman Program" and wrote the story for a "Metalocalypse" episode. He also made an appearance in the Judd Apatow film "Funny People", and directed a video for the hilarious hair metal band, Steel Panther.

In 2010 he released the album called "Fart and Wiener Jokes" and a new video for "More Metal Than You", and was recently featured on the Golden Gods Awards performing his new song with his all-star metal band. Posehn continues to tour and work on a new comic book ("Science Projects").