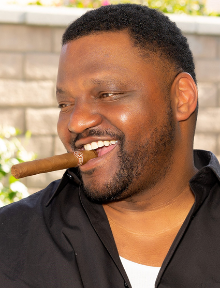 A true comedic heavyweight, "MADtv" standout Aries Spears always comes loaded with the best impressions in the game and a unique take on everything from sports to current events. Spears released his latest special, "Aries Spears: Comedy Blueprint," in 2016.

Due to capacity restrictions and recommendations by local authorities and in the interest of social distancing, we will be selling tables rather than individual tickets to our events. At this time, customers will not be sharing tables with anyone other than their party. Tables are maxed out at 4 people per table. In the event more than four people are attending a show together as a group, you will be separated into multiple tables and these tables will maintain 6-foot social distancing rules.

Each table comes with the corresponding number of tickets:
2 top = 2 tickets | 4 top = 4 tickets

Ever since New York native Aries Spears was 14 years old, he has been a force to be reckoned with in the comedy scene throughout America. His quick wit, charisma and ferociously aggressive style of comedy have earned him critical acclaim, high accolades, and above all, a busy schedule. From being a regular on Fox’s Mad TV, starring in feature films, appearing on a number of national talk shows, and continually touring the country with his stand-up, Aries’s talents are becoming recognized and appreciated throughout the entertainment industry.

As a principal cast member on Fox’s hit sketch comedy show Mad TV, Aries brought a fresh, hip style to the already-edgy program from the third through the tenth season. The producers made full use of many of Aries’s talents by calling on him frequently to create new hilarious characters and write sketches. Some of the many recurring characters that Aries is famous for on the show include: Belma Buttons, Bill Cosby, Jesse Jackson, Mike Tyson, Walter (Crackheads), Reggie (Erascist), Dollar Bill Montgomery, Shaquille O'Neal, The Klumps, Michael Jackson, Sisqo, Evander Holyfield, El Diablo Negro and more. Aries also boasts a number of uproarious impersonations on the show that include James Brown, Al Pacino, and his childhood idol Eddie Murphy. The Aries-branded sketch “Talkin’ American” was Mad TV’s most popular bit, keeping fans tuned in and boosting Mad’s ratings impressively on Saturday night.

Aries has also found great success in the world of feature films. At the age of 17, after being spotted in a comedy club, Aries landed a part in the movie Home of Angels, which also starred Abe Vigoda and Sherman Helmsley, but never saw a theatrical release. He then appeared in Out-of-Sync, and portrayed Red Foxx in Warner Bros.’s Why Do Fools Fall In Love. In addition, Aries starred alongside John Leguizamo in TriStar’s The Pest and delivered his most notable performance to date as Cuba Gooding, Jr.’s brother in Columbia’s blockbuster hit Jerry Maguire.

Aries was born on April 3, 1975 in Chicago but grew up in New York City. He remembers at the young age of six being the funnyman of the household and impersonating family members at the dinner table during holidays. By age 14, Aries was belting out his fresh stylings in front of paying audiences at local clubs around his hometown. Shortly thereafter, he appeared on Russell Simmons’s Def Comedy Jam on HBO and Showtime at the Apollo. The word was out about the prodigal superstar from then on, and in 1992, Aries moved to Los Angeles. He quickly landed a recurring role on NBC’s A Different World, and was signed to a huge development deal at one of the major television studios. The following year, Aries found himself starring in the short-lived CBS series South of Sunset with former Eagles guitarist Glenn Frey. Although the series didn’t last long, it did not discourage other networks from tapping Aries’s talents for their projects, as he soon appeared in Crosstown Traffic and Brisco County, Jr. for Fox. Ultimately, Aries’s fierce momentum landed him on Mad TV as a series regular, where he thrived for eight seasons.

Aries continues to spread his comedic wings with the development of feature film projects, which he is currently involved in writing. He is presently developing a feature project based on an original character that he created on Mad TV, as well as a thriller about a young black man immersed in hip-hop culture. Additionally, Aries has made appearances on many talk shows including: Loveline, Vibe, Keenen Ivory Wayans, Soul Train, and Late Friday. He has also lent his voice to an animated character on C-Bear and Jamal and had a recurring stint on Fox’s The Best Damn Sports Show Period, where he created some of the show’s funniest characters during his short time there.

Aries maintains a strong connection to his African roots and is involved in many charitable events, including a number of organizations that help abused women. He feels blessed to have been able to achieve everything that he has, but he in no way intends on stopping there. Given the extreme growing success rate of action comedies coming out of Hollywood, it’s safe to say that Aries Spears will be in demand for quite some time.