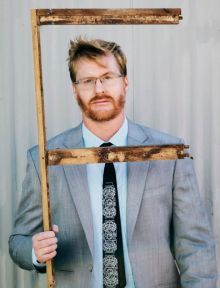 Kurt Braunohler is the host of the popular "The K Ohle with Kurt Braunohler" podcast on the Nerdist network and is the former host of anti-game show "BUNK!" on IFC. He was named one of "Variety’s" Top 10 Comics to Watch, as well as one of "Time Out NY’s" 50 Funniest New Yorkers. He has appeared on "@midnight," "Chelsea Lately," "Drunk History," and much more. He released his first hour-long Comedy Central special, "Trust Me," in 2017.

Kurt Braunohler is an “adult” male comedian, who enjoys skywriting jokes in the sky and altering greeting cards.

Kurt was recently named one of Variety’s “Top 10 Comics to Watch” as well as Time Out NY’s “50 Funniest New Yorkers”. He was even named another “Comic to Watch” by Comedy Central and the New York Comedy Festival.

Kurt has been seen (or heard) on TV on Bob’s Burgers (FOX), Chelsea Lately, Delocated (Adult Swim), John Oliver’s NY Stand Up Show, The Heart She Holler (Adult Swim), Comedy Central Presents, Jon Benjamin Has a Van (Comedy Central), Assy McGee (Adult Swim), Human Giant (MTV) and the anti-game show he hosts, BUNK! on IFC. He can also be heard on the radio on This American Life.